Hopefully this information will help to lessen the unnecessary stress that hikers put themselves through when attempting to plan how to get more food and supplies into their packs whilst tramping through PCT wilderness.

Remember, this information is sourced from actual PCT hikers and is more than just one dude's opinion (I'm that dude), but if we come across any anomalies in the data I will be sure to add my two cents (because I can't afford more).

NOTE: A list of the different categories I broke hikers into and how they are identified can be found at the end of this post.

TO MAIL OR NOT TO MAIL?

First, hikers think they must decide how many resupply boxes to send.

Unless you've chosen to mail yourself ALL your resupply boxes, which I would definitely NOT recommend doing unless you have a very legitimate reason (e.g. you only eat Vegemite and dehydrated free-range poultry), then the only boxes you're going to want to concern yourself with sending before you begin your hike are those you'll need in the desert.

Instead, what you do is MAIL YOURSELF BOXES FROM THE TRAIL. When you get to a stop with a large and affordable enough selection of hiker food you buy yourself an extra resupply, pack it into a box, and mail it up the trail.

This saves you the stress of needing to pack everything into boxes beforehand and allows you the flexibility to mix up your resupplies on the trail (because chances are your taste/diet will change as you being to turn into an unstoppable hiking machine).

Let's go with the average and mail 12 resupply boxes. Where do we want to send them?

According to this year's class, the places you're going to want to mail your twelve resupply boxes are (in geographical order from south to north):

So for the ENTIRE STATE of California you are only sending yourself THREE BOXES.

A lot of hikers also say that they wish they would have SENT BOXES FROM THE TRAIL instead of preparing all their resupplies ahead of time.

I know this might sound like a scary idea (does it really?), but trust me, it's a smart move.

And the idea that you don't need to mail a lot of resupply boxes isn't only coming from people who mailed themselves far too many. An entire 12% of people who sent FEWER than the average of 12 said they would have preferred fewer boxes when asked what about their resupply strategy they would have changed.

I also asked hikers where they would have rather mailed themselves a box instead of buying locally. This could be either because the selection isn't very good, the prices are high, or the store owners are assholes.

The top responses were (in geographic order from south to north):

Agua Dulce, VVR, Kennedy Meadows North, and Belden did not make the “send a box here” list, so if you're planning on resupplying at one of these locations (our “average resupply plan” is below) then you may want to consider sending an additional box.

Lastly (for this section), I asked what CHANGES hikers would make to their resupply strategies?

WHAT FOOD TO SEND

Okay, but once you have your boxes, what should you be PUTTING INSIDE them? Some of the TOP COMMENTS I got from hikers about their resupplies said the following: 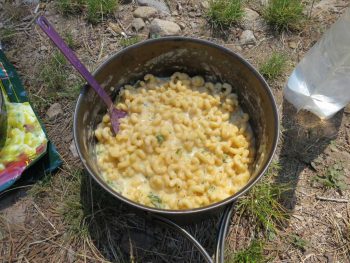 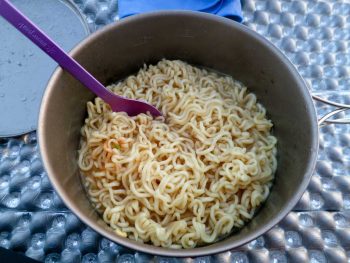 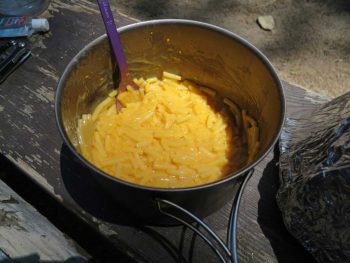 Looking for meal suggestions? The favorite (and least favorite) foods as reported by hikers were as follows:

HOW FREQUENTLY TO STOP

Another question on the resupply agenda is “How often do I want to resupply?”

This is incredibly difficult for hikers to accurately predict before starting the trail because few people know what their pace is going to be or what their still unknown trail friends will want to do (just remember to hike your own hike).

Stopping more frequently means less time spent hiking (which before starting your hike might sound like a bad thing), but it also means that you will not be carrying as much weight (in food) between your resupplies (lighter = better).

So how many stops did the Class of 2016 make on their thru-hikes?

And in their comments, many said they would have liked to resupply MORE OFTEN.

So let's say that we're going to just take the average plus one standard deviation to accommodate for the “more often” factor. That gives us a total of 32 resupply stops. That means you're resupplying EVERY 83 MILES (134 km) on average. If you don't want to carry more than seven days worth of food (which is a lot), then you would need to be doing an AVERAGE OF 11.8 miles per day (18.9 km).

Based on survey responses we can piece together what an “average” Pacific Crest Trail hiker's resupply looked like for a 2016 thru-hike.

Now that we know how many boxes we're mailing (12), where we're mailing them to, what's going in them, and how often we want to stop for resupplies, we can focus on arguably the most important question: where exactly are we going to stop?

A look we shall take, yes?

NOTE: The percentage of hikers who resupplied at each of the following places has been coded as follows: OVER 66%, 33-66%, LESS THAN 33%. Also, stops are listed in geographical order from south to north.

If you're interested in my PCT resupply for each section then check out the following posts:

That's a lot of information.

How would our average Pacific Crest Trail thru-hiker have used his or her 32 resupply stops based on this information?

It would look something like this (COLORED NAMES indicate that sending a box was prefered by this year's class):

I also asked about hikers' FAVORITE and LEAST FAVORITE resupply points. Here's what we came up with (for each section):

And lastly, what about hitchhiking into town? I asked hikers what resupply stops (if any) they had difficulty making it to from the trail. The top responses were (from south to north):

If there is ANYTHING you can think of that would make this information more useful (or any more resupply related cross-referencing you would like to see), then please LEAVE A COMMENT and let me know.

FOR MORE ON PCT RESUPPLY, CHECK OUT THESE POSTS.

Here are the labels used to differentiate hiker segments in this post:

Did you ever come across folk using Soylent/similar for part/all of their food needs?

hey! Thanks for the great article. Really informative for someone who is looking into thru hiking. I have a couple of questions though.

Early on you mentioned that only 3 boxes were needed for the length of california. Knowing that california is roughly half way up the coast why wouldnt you only need 6 boxes total?

In the early sections (desert/sierra) the distance between resupplies is over 500 miles
“Warner Springs (Desert) – Mile 110
Kennedy Meadows (Sierra) – Mile 703”
and later on, the distance between resupplies is about 100 miles (in the oregon section). How are you accounting for this? It doesnt seem to add up to me in terms of #days of food vs miles. Any thoughts? Thanks!

The boxes are only for places where the resupply options at the local retailers (if there are any) are not very favorable.

Just wanted to say thanks for an awesome, comprehensive site and a wealth of simple, to the point info on all aspects of the PCT (I’m sure the rest of your trip sections are the same). Hard to find all of this solid info organized nicely in one place. Been doing 1 to 2 week backpacking trips for a few years now and want to get into long distance hiking in the future and this is what I needed to get started.

Thanks, Lee. Hopefully you make it out onto the PCT soon!

Thanks for making this resuply survey 🙂

those 12 boxes and stops seem logical! so i keep that in mind for my resuply.
Question is: i fly in from The Netherland i think it wil be LA because it is 200 euro,s cheaper to go there first. have to figure out how to get down south from there just yet.

So is it wise to send just a big box from LA to the first resuply stop and then send it ahead again.
I am thinking of some products in can bring in from the Netherlands that are hard to get in the usa. example 1kg pots of peanutbuter and stroopwafels 🙂

http://www.iamsterdam.com/media/typically-dutch/stroopwafel-cc-by-20-steven-vance-via-flickr.jpg?h=397&w=700&la=en
I am also thinking of bringing aditional gear ( if needed ) and send it directly to kennedy meadows but can it stay there for a long time. ( switch from dessert gear to alpine gear )

That isn’t a bad idea. What you’re describing sounds like what hikers call a bounce box. Just be careful to nor arrive at the post office on a day it’s closed!

What are the best towns to mail boxes FROM? Are those the “favorite resupply” towns, or are those favorites because they’re nice to visit? (It’s unclear if you’d just pick up a box from there as your resupply).

That’s a good thing to include. Some of the best towns that come to mind (without searching) are Idyllwild, Big Bear, Bishop, South Lake Tahoe, Chester, Ashland, and Hood River (Cascade Locks).

Did you ever buy stuff online from Amazon or REI.com on-trail? I’m planning to do the PCT in 2018 and going over my gear list. I’d love to avoid upgrade fever and just get out there with what I’ve got, and if something like my puffy jacket isn’t up to snuff then bite the bullet and purchase that badass absurdly expensive ghost whisperer online and pick it up at the next post office.

Also what kinds of non-food items do you recommend sending to yourself? I’m thinking some down wash might be a good idea, so I can wash my sleeping bag every 6 weeks or so. I doubt the local laundromat sells that stuff. (Is that a good idea or dumb?)