Why You Shouldn’t Start a PCT Thru-hike in March

Every year, hopeful Pacific Crest Trail thru-hikers must decide when to begin their thru-hikes. True, this has become slightly more difficult over the years with new PCT permit regulations and the increasing popularity of the trail, but generally, hikers are able to get starting dates they’re more or less happy with (at least according to the PCT Survey data).

March, April, and May are the three months the 50-person-per-day quota is enforced at the southern terminus of the PCT which may lead you to believe that March is a reasonable month to begin a PCT thru-hike – it’s not. To be clear, when I say that you shouldn’t start a PCT thru-hike in March, I’m talking about both northbound and southbound thru-hikes. That said, if you’re thinking about starting a southbound thru-hike in March, you had best know what you’re doing because Washington will still be under snow for many months to come. This article is directed toward northbound thru-hikers beginning their hikes in Campo at the US-Mexico border.

Hikers think to themselves, “I’ll just start early (i.e. in March) and take my time through the desert while I get myself used to thru-hiking and figure out my gear. I’m not in any rush to get to the Sierra and I don’t want to hurt myself going fast at the start. By the time I make it to Kennedy Meadows (i.e. the start of the Sierra), the snow will have melted.” Not a bad plan – if the first 700 mi / 1,127 km of the Pacific Crest Trail were in fact all snow-free desert. They’re not.

The PCT begins in the chaparral of Southern California at an elevation of 2,913 ft / 888 m but then, within the first 50 mi / 80 km, climbs to over 6,000 ft / 1,829 m at Mount Laguna. Mount Laguna gets an average of 13.4 in / 34 cm of snow a year and averages temperatures of freezing or below for over a third of March. These numbers aren’t that big of a deal, but they’re just the start of a series of challenges PCT hikers face in “the desert”.

I have personally been caught in snowstorms on the PCT near Idyllwild in May. May, as many of you might know, is two months after March. You could easily find yourself needing snow gear well before hitting the Sierra (for a look at the most popular snow gear from the PCT last year, check out the PCT Gear Guide).

Following San Jacinto, the trail climbs through the San Gorgonio Wilderness passing San Gorgonio – the tallest mountain in Southern California. Hikers enter the San Bernardino National Forest as the trail heads toward Big Bear – home to multiple ski resorts. Why are there ski resorts in the desert? Because you’re not in the desert. Contrary to popular belief, there are a lot of PCT miles in Southern California that do not fit into the category of “desert”.

If you take anything away from this, let it be that starting a Pacific Crest Trail thru-hike in March by no means makes your hike any easier. Quite the opposite – it could make your hike a lot more difficult. Yes, taking your time at the start of a thru-hike is a good idea if you want to ease your way into your hike. However, there’s a delicate balance to be struck between when you start the PCT, when you hit the Sierra, and when you finish the PCT. Winter conditions can be a big issue at any one of these points. This doesn’t mean that you can’t or won’t make it past these conditions, but instead that you should be adequately prepared to deal with them.

Ultimately, every year is different. It could be that one year, starting a PCT thru-hike in March would result in (relatively) easy and snow-free hiking for the first 700+ miles (1,127+ km), or it could mean that you’re hiking in freezing temperatures and snow for two or three months. Just remember that conditions can change wildly from year to year and that late-season storms are most certainly a thing. If you’re interested in the areas of Southern California where you might encounter terrain more akin to the desert you may be imagining, check out this post. 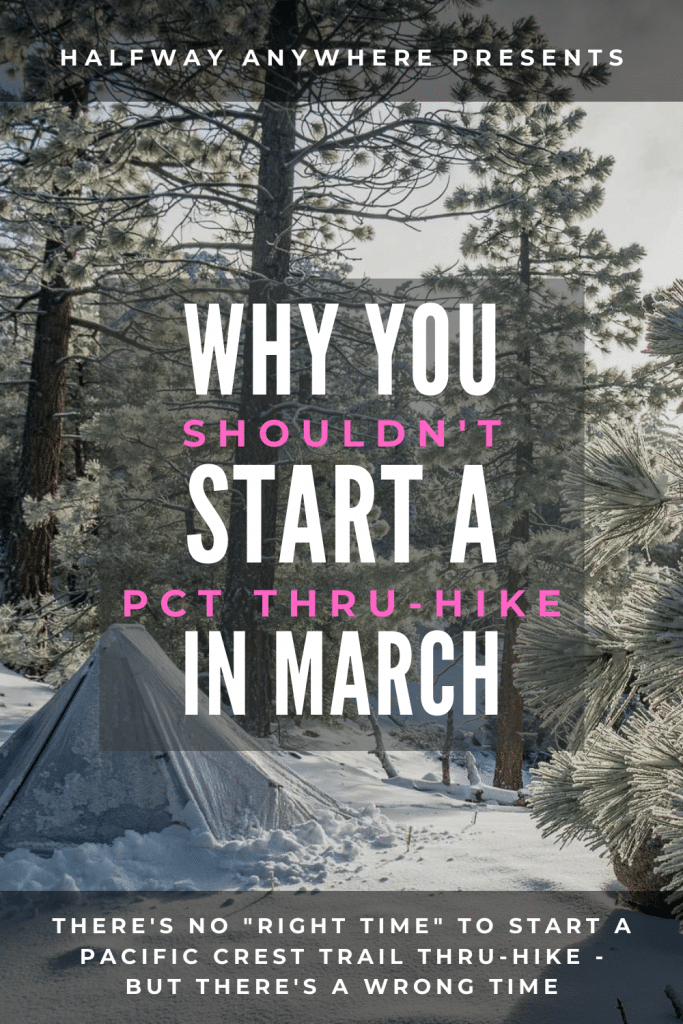